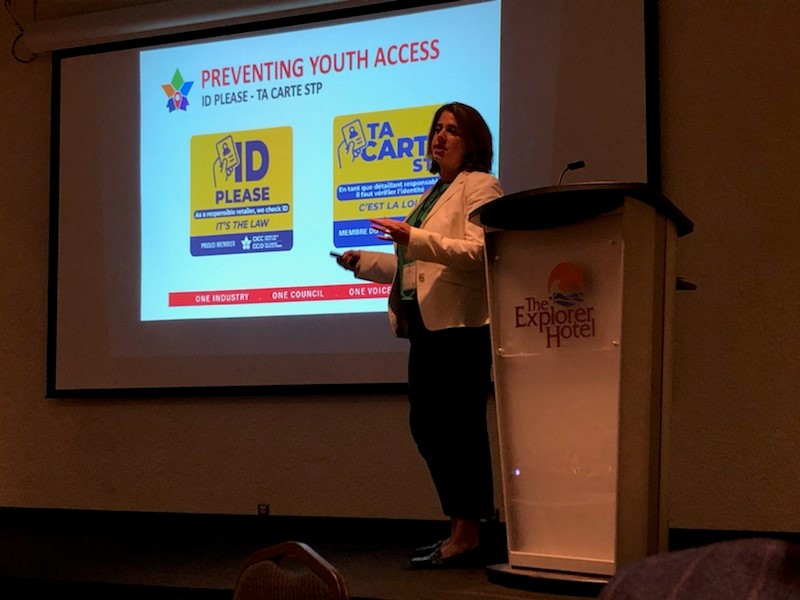 It’s been an intensive month across the country for the CICC government relations team. From small municipalities like Lunenburg, to speaking engagements in Yellowknife, the issues and pace have been unrelenting. Starting west and moving east, below is a by no means exhaustive roundup of some of the key government relations activities undertaken in the month of June.

The CICC was asked to participate in the 2020 Pre-Budget Consultation process with the Government of British Columbia where we raised several issues of concern for our members. These include reducing the regulatory and tax burden in BC, combating another increase to the minimum wage, the liberalization of beer and wine sales in the province, and cracking down on the sale of contraband tobacco. Our discussion with government officials in that province is ongoing and we expect to partake in face to face meetings with the BC Minister of Finance over the summer.

Anne Kothawala and Matthew Ellis also had a great conversation with Liberal MLA Todd Stone regarding his anti-vaping private members bill. During this call we raised the concerns of our members and stressed the importance of convenience stores as responsible retailers with the greatest access to current adult smokers and the greatest ability to help them choose reduced risk products. We stressed the need to take “politics” out of the discussion and make sure that sound public policy remains the goal of any proposed changes, including any prohibition against sales, flavours and information awareness campaigns.

Over the past few days we have also been extremely busy dealing with an issue arising out of a letter that is being distributed by the Edmonton Police Service warning of increased policing of flavoured vape products and their display at convenience locations across the province of Alberta. The CICC is hard at work on this file and we are communicating our concerns directly with the Premier’s office, the Alberta Ministry of Health, and the Alberta Ministry of Justice. We will continue to vigorously defend our industry’s ability to sell reduced risk products to our adult customers.

We have been invited to participate in a red-tape reduction panel being undertaken by the Government of Alberta that will take place in mid-July. This will provide the CICC an excellent opportunity to meet with policy makers in Alberta and to directly address many of the concerns our channel faces in the province.

The Legislative Assembly of Ontario adjourned for the summer on June 5th and will not return until after the federal election in October. Before rising, the government passed Bill-115 allowing the cancellation of the Master Framework Agreement with the Beer Store. While both the Government of Ontario and Brewers Retail Inc. are still at the negotiation table, this passage paves the way towards the sale of beer and wine in convenience stores in Ontario.

After rising for the summer, Premier Ford announced on June 20th a long-awaited cabinet shuffle. For the purposes of the CICC, the biggest move of the day came with Minister Fedeli being shuffled out of the Finance Portfolio, and therefore from the beer and wine file. In his place, Rod Philips, the former Minister of Environment has been promoted to the position of Minister of Finance and is now responsible for our biggest Ontario file.

The CICC has an outstanding relationship with Minister Philips through previous political interactions on leadership and local election campaigns. In addition, Minister Philips will have at least some knowledge of the value of the convenience industry, stemming from his days as the former president and CEO of the Ontario Lottery and Gaming Corporation.

Prior to and continuing after the shuffle, the CICC has seen some significant wins in our relationship building exercise with the Ford administration, in particular on the beer and wine file.

We have also undertaken a grassroots mobilization campaign which includes the distribution of posters promoting the expansion of beer and wine through our channel to participating retail locations as early as this week. We have been encouraged by the government to participate as widely as we are able and have been asked to arrange future ministerial and MPP visits to retail locations across the province, and to potentially involve the government in an announcement on a broad rollout of our ID Please program.

We have also received an indication that the Government of Ontario will be interested in further discussions on fighting the sale of contraband tobacco in Ontario. We will keep our members apprised of any developments on this issue as it progresses.

In La Belle Province we have been engaging with the government on a number of important files for our sector. We are continuing to engage with political and bureaucratic officials as well as a number of stakeholders on environmental issues including potential restrictions on single use plastics, waste diversion and expanded bottle deposit and return programs.

In addition, we have been engaging on governmental initiatives to reduce the red tape and regulatory burden faced by our channels. Further meetings on this are in the works and we will keep our members in Quebec and across the country apprised of any developments.

We have also been engaging with our stakeholders to identify a number of “best practices” that can be transplanted to other jurisdictions on the beer and wine file, contraband tobacco regulation and enforcement, and environmental policies that include single use plastics and waste diversion.

June also saw several issues arise on the east coast that the CICC needed to address. First, the town of Lunenburg, Nova Scotia had a proposal before town council that would have implemented the single most extensive ban of single use plastics in the country. We consulted with members of town council about the effects such a ban would have and committed to discussing ways to reduce and properly divert our waste without implementing such a wide spread ban on everything from water bottles to food containers and condiment packages.

The council heard our concerns and refused to implement this proposal as it was tabled. The CICC will continue to work with Lunenburg and other jurisdictions across the country as similar proposals are discussed.

We also travelled to New Brunswick to meet with the Atlantic Lottery Corporation. Following our meeting, the ALC agreed to continue a 1% bonus on all Scratch’N Win ticket sales from September 29th, 2019 to March 29th, 2020.

In addition to meeting with ALC, Keith King represented the CICC at a discussion with New Brunswick Minister of Finance, Minister Ernie Steeves. We talked about the importance of National Convenience Week and invited members of the Government of New Brunswick to participate. We also discussed the possibility of expanding beer and wine sales into the convenience channel. We have committed to bringing the Minister a proposal on this in the coming days and further discussions will take place with the government in the near future.

At the federal level, the House of Commons and Senate have sat for, likely, the last time prior to this Fall’s federal election, leaving a number of bills to die on the order paper. Of particular interest is the “Marketing to Kids” bill that did not receive final reading before the senate rose for the summer. It is likely that this bill will become a topic of discussion during the federal election and should the Liberal government be re-elected; it will see a prompt return to the order paper in November.

With the House no longer sitting, there is still a chance, however slim, that draft regulations on vaping issues, namely flavouring, could be introduced. However, it is more likely that the Liberal party will use this as an election issue as it is very top of mind.

Our CEO, Anne Kothawala, recently travelled to Yellowknife to participate in the 2019 Interprovincial Investigations Council for Tobacco Conference. While there, Anne talked about a number of challenges facing the legal tobacco market, namely the wide spread sale of contraband products, the implementation of plain packaging and the unlevel playing field between our members and specialty vape shops. In addition, she discussed the creation of the CICC and our efforts to prevent youth access to tobacco and other age restricted products through our “ID Please” program.