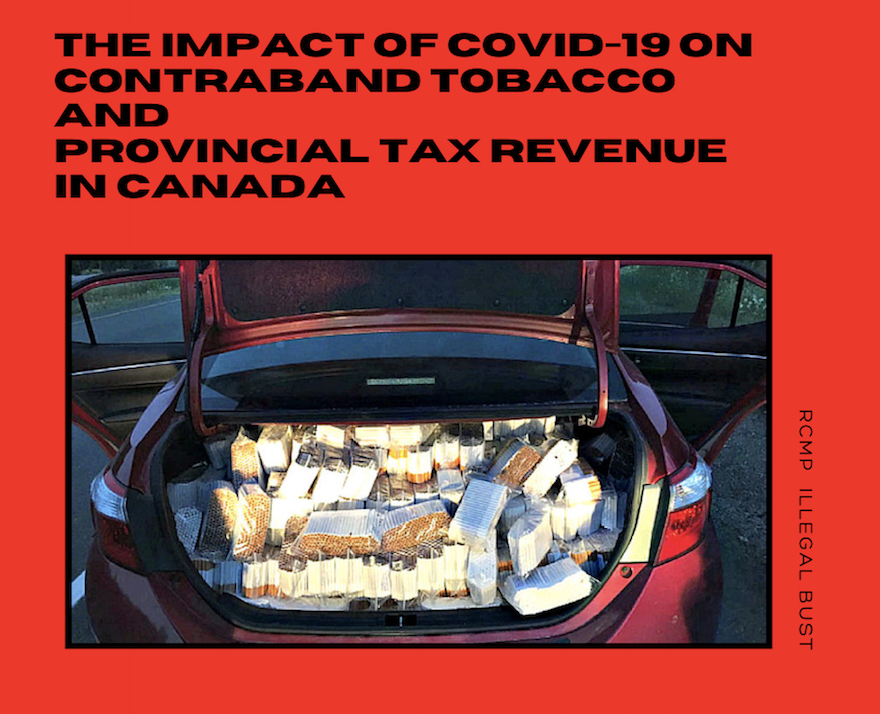 December 14, 2020 — A new study conducted for the Convenience Industry Council of Canada (CICC) by Ernst & Young LLP (EY) has revealed the extent of the illegal cigarette market in Canada — and the cost to provincial treasuries in foregone tax revenue.

The study establishes a direct link between the closure of tobacco manufacturing operations and smoke shops on First Nations reserves, and an increase in legal tobacco sales. It finds this temporary closure at the onset of the COVID-19 pandemic in mid-March was followed by a gradual, sustained uptick in legal cigarette sales across Canada.

Data from stores included in the study shows that legal cigarette sales peaked in June 2020, representing a 24% increase over sales in this same period of time in 2019. Notably, when on-reserve stores and cigarette factories re-opened in July, legal sales plummeted back down to pre-pandemic levels.

The increase in legal sales during the shutdown was most dramatic in Atlantic Canada. Legal cigarette sales in June 2020 were up 44.9% in New Brunswick, 47% in PEI and 44.3% in Newfoundland and Labrador, compared to June 2019. The study indicates that the closure of the Atlantic border was a one of the factors restricting the movement of illegal tobacco traffickers.

The temporary shutdown of the illegal cigarette trade across Canada had noticeable, positive impacts on provincial treasuries. In the month of June alone, the increased sales in the stores studied brought an additional $50 million in tax revenue to provinces ($32M) and the federal government ($18M). Ontario and Quebec saw revenues increase by $6.3M and $6.7M, respectively, while in New Brunswick the province took in an extra $5.1M in June.

A number of alternative explanations and factors for an increase in legal sales – including seasonality of sales, price or tax decreases, cross border travel implications and an increased prevalence in smoking during this period were evaluated and eliminated by the authors of the study as a rationale for explaining these increases.

“This study proves what we have been saying for a long time: the contraband problem is significant and governments must act now,” said Anne Kothawala, President & CEO of CICC.

“Gauging the size of the unlicensed cigarette market in Canada has historically been difficult. But major manufacturing and distribution shutdowns in response to COVID-19, demonstrated a significant change in sales,” said Fred O’Riordan, EY Canada’s Tax Policy Leader and the lead author of the report. “As supplies of contraband dried up, smokers who typically purchased tobacco products illegally had instead to buy legal, duty-paid cigarettes. As a result, we were able to measure significant windfalls to provincial treasuries.”

Canada’s epicentre of illegal tobacco operations is in Ontario and Quebec, but as the study confirms, well-established contraband supply networks are able to distribute illegal tobacco nationwide from these central Canadian provinces, costing provinces tens of millions in foregone tax revenue every month and undermining public health. The Convenience Industry Council of Canada is calling on all orders of government to act on the report’s findings by:

“As we emerge from this once-in-a-lifetime shock to our economy, governments must look at all options to pick up lost revenue,” said Anne Kothawala, President & CEO of the Convenience Industry Council of Canada. “Enhanced enforcement would cost a fraction of the total annual tax loss in Canada. Provincial treasuries will know the extent of it. In Ontario alone, per annum losses have been estimated to be $750 million. Left unchecked, contraband networks have economic consequences for both law-abiding retailers like convenience stores but also for governments, to say nothing of the major consequences on public health and safety,” concluded Kothawala.

The study evaluates sales data from members of the CICC, the Canadian Tobacco Manufacturers Council and legal production and excise revenue data provided by the Canada Revenue Agency. For a full copy of the study, click HERE.